WIP: Juggerspawn and his buddy

Here's another juggerspawn of the same breed as the first: 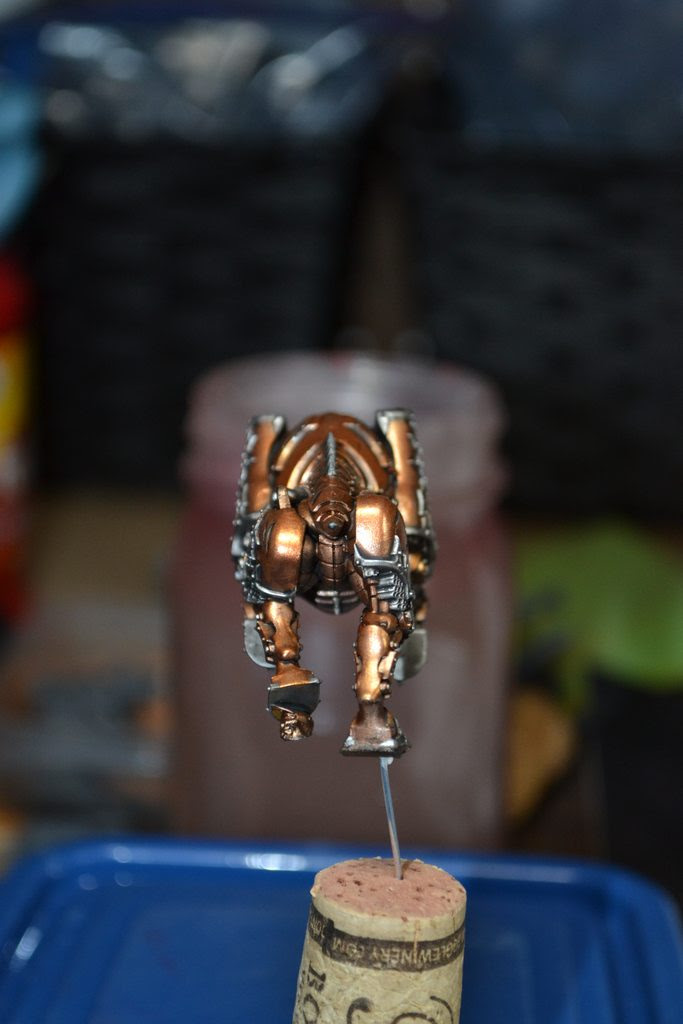 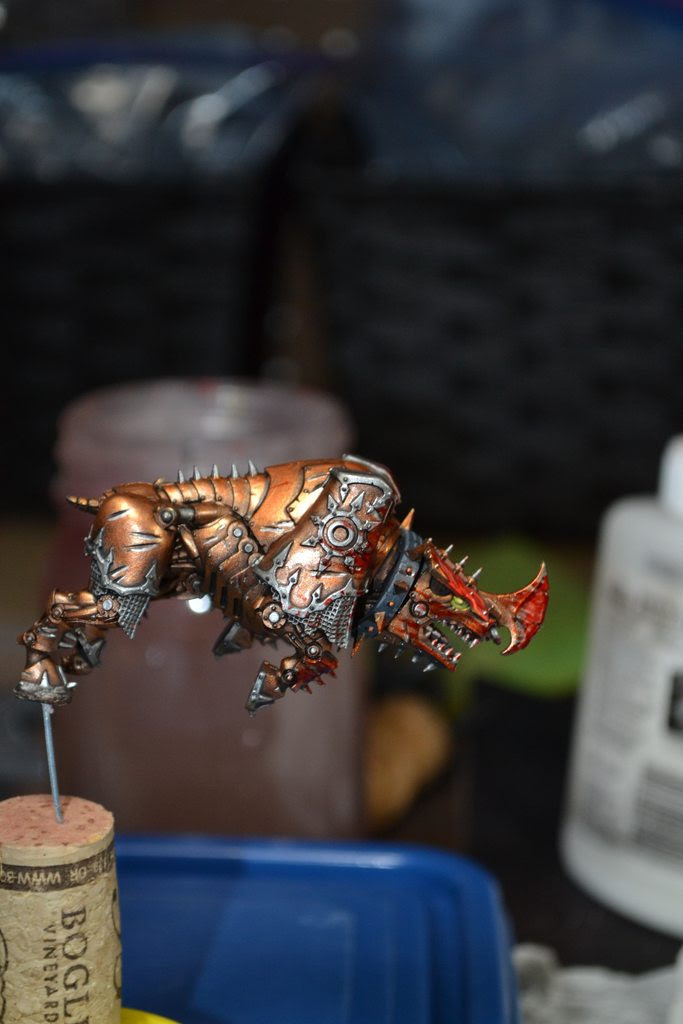 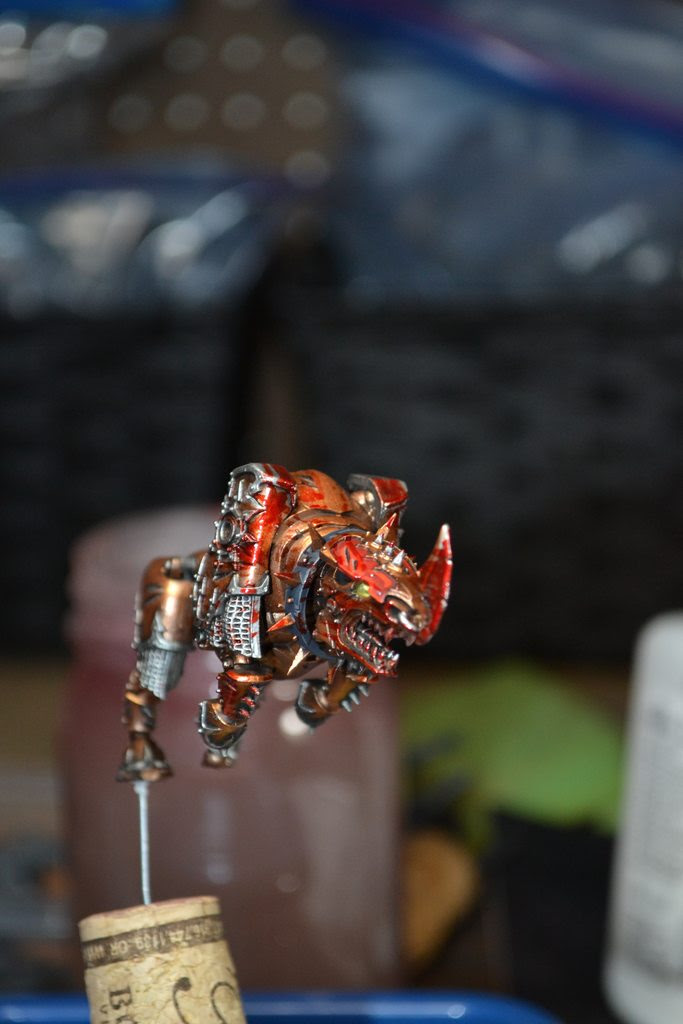 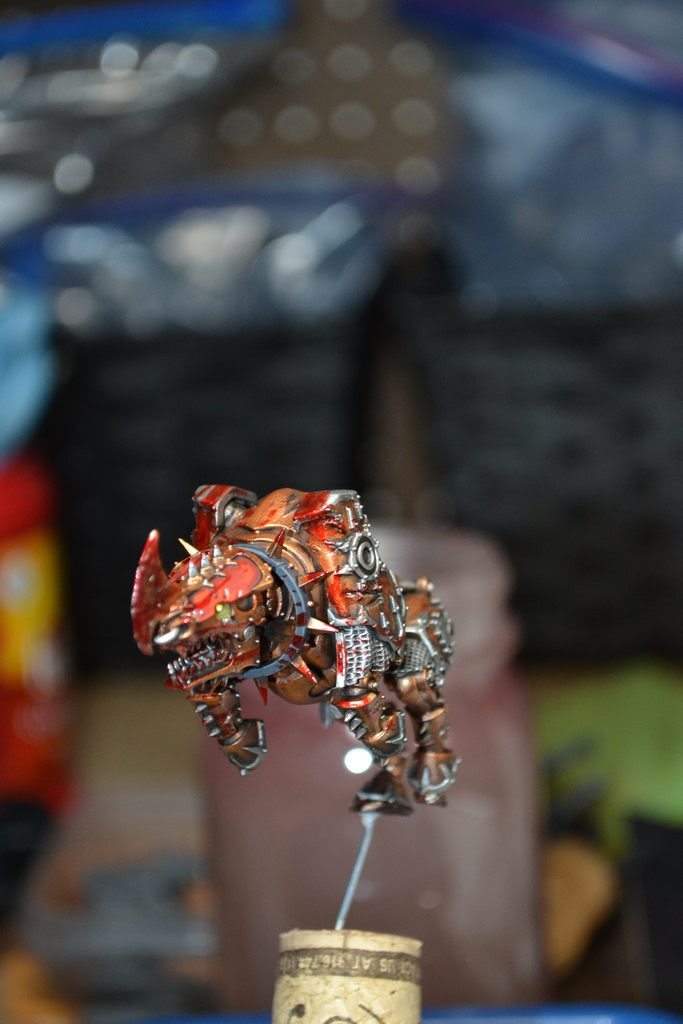 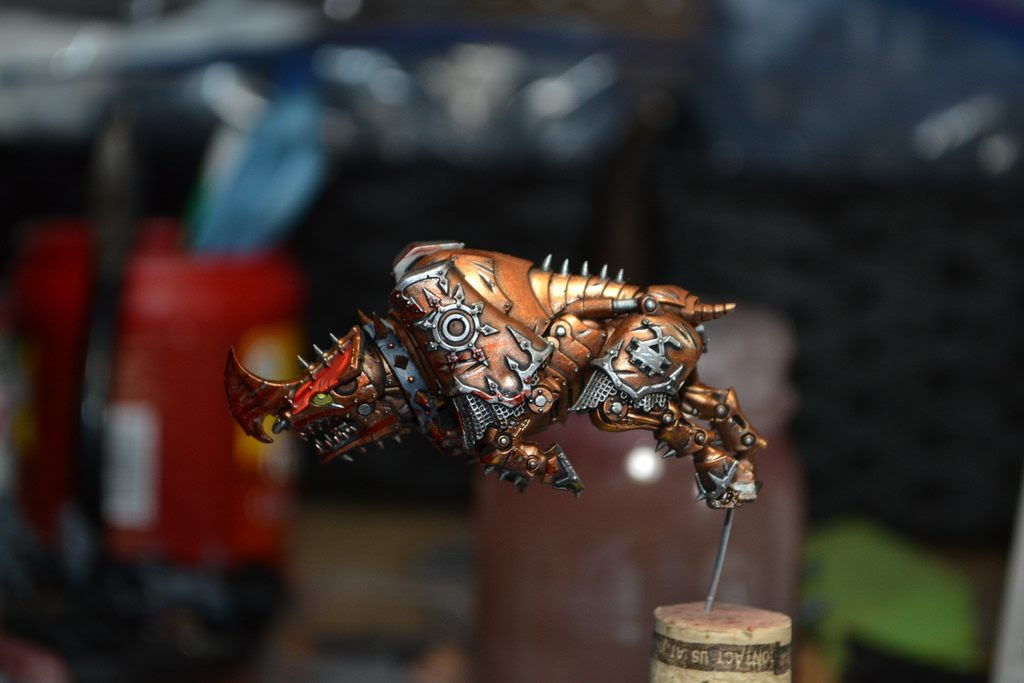 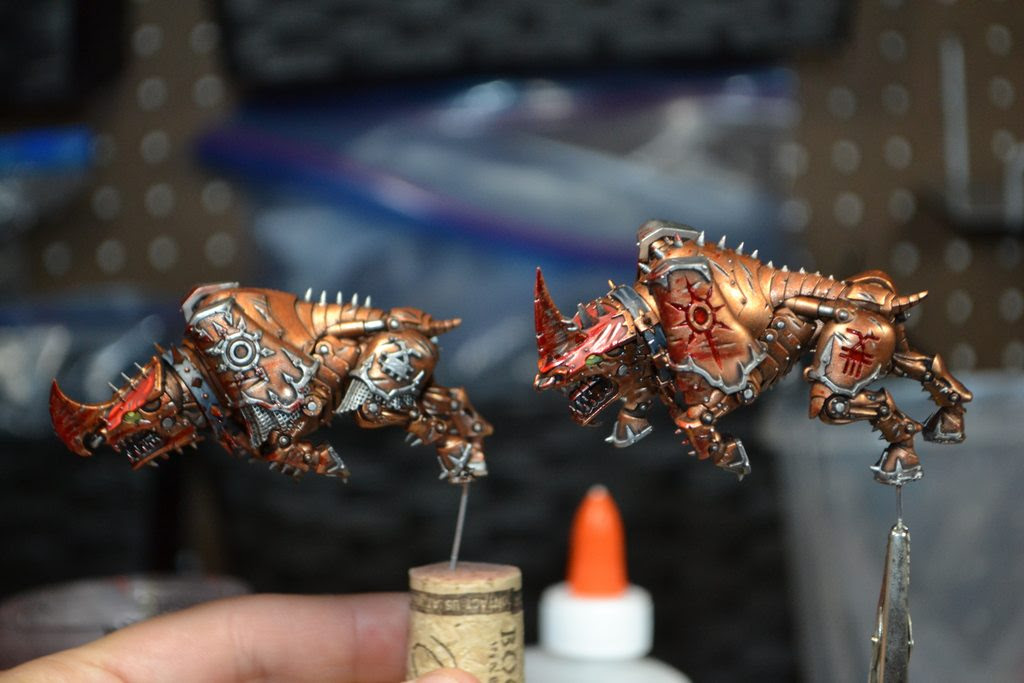 For my next breed of juggerspawn I'm working on a variant of this scheme from GW: 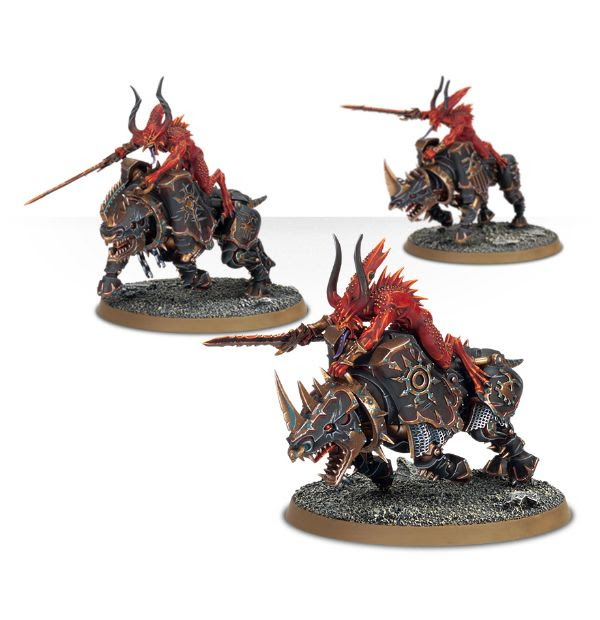 My brass isn't quite as red as theirs is, but with a wash of Agrax Earthshade the shine is dulled sufficiently: 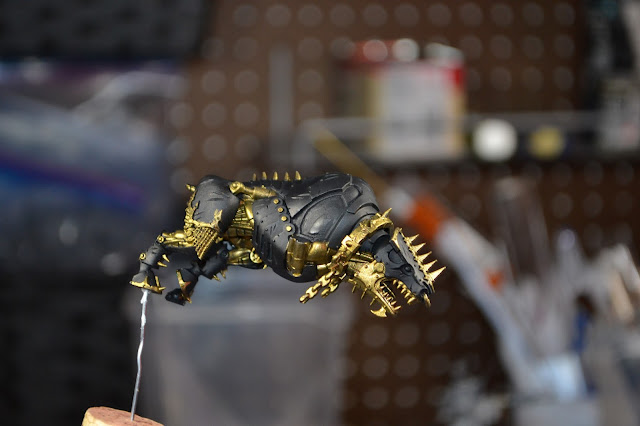 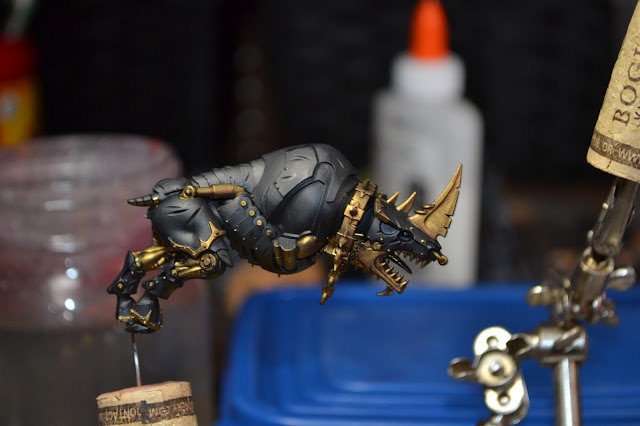 I'm debating the use of Reikland Fleshshade to add an even redder tint to the brass, but this might be good enough.

Also, I'm painting the chainmail skirts silver. Wasn't even thinking as I painted them brass. That's just goofy! Really it adds a little bit of much-needed contrast to an otherwise two color model.
Posted by Juggernut at 8:49 AM No comments:

There are only a few details left to take care of like brighter eyes, a little more blood, and some weathering on his hooves to match the basing to come, but by and large he's done and I'm happy with how he turned out: 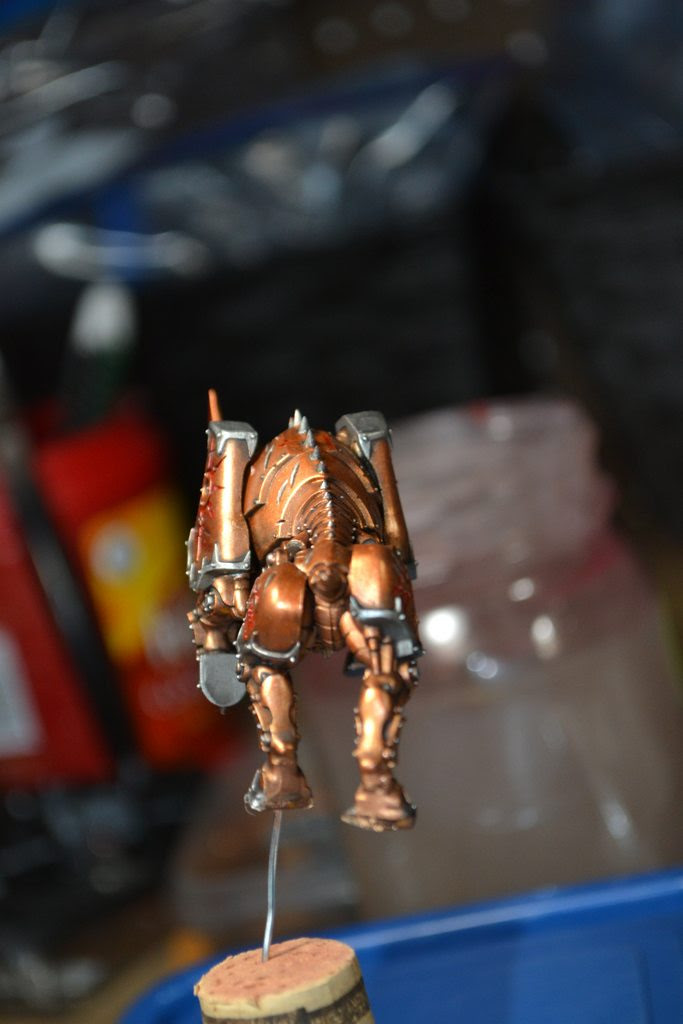 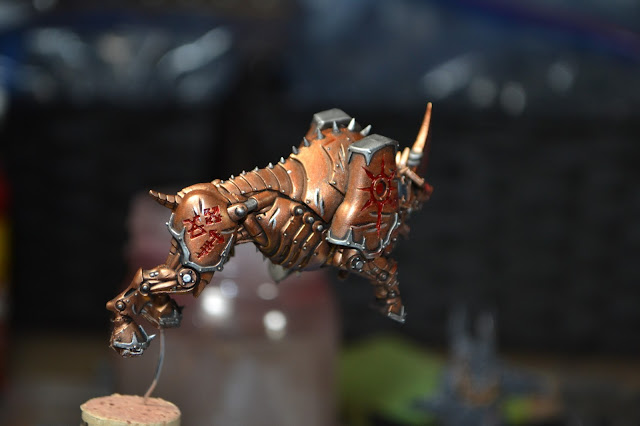 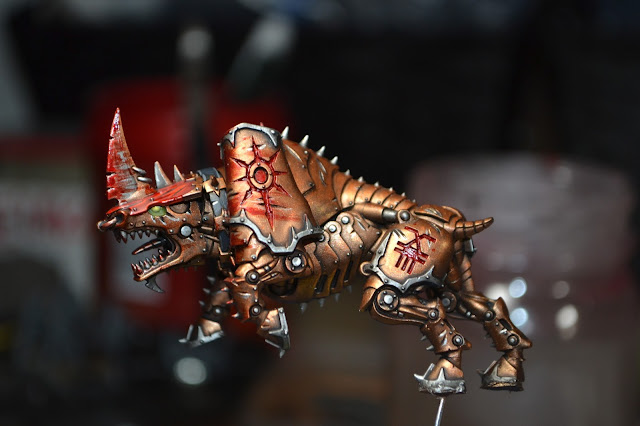 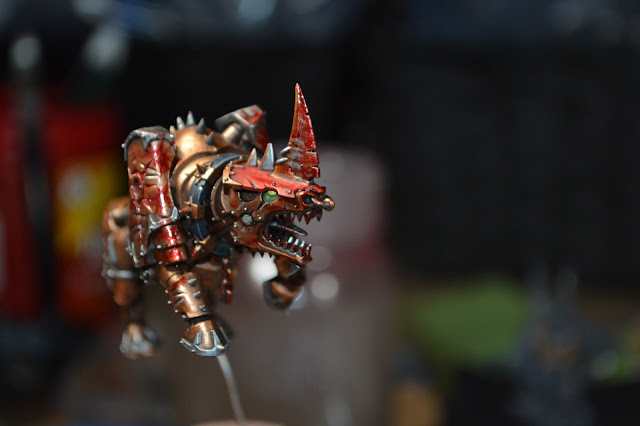 As mentioned before, the theme of the Brass Stampede Khorne Daemonkin legion is juggernauts. Here, I've begun painting the first juggernaut in the army, which is a counts-as spawn. 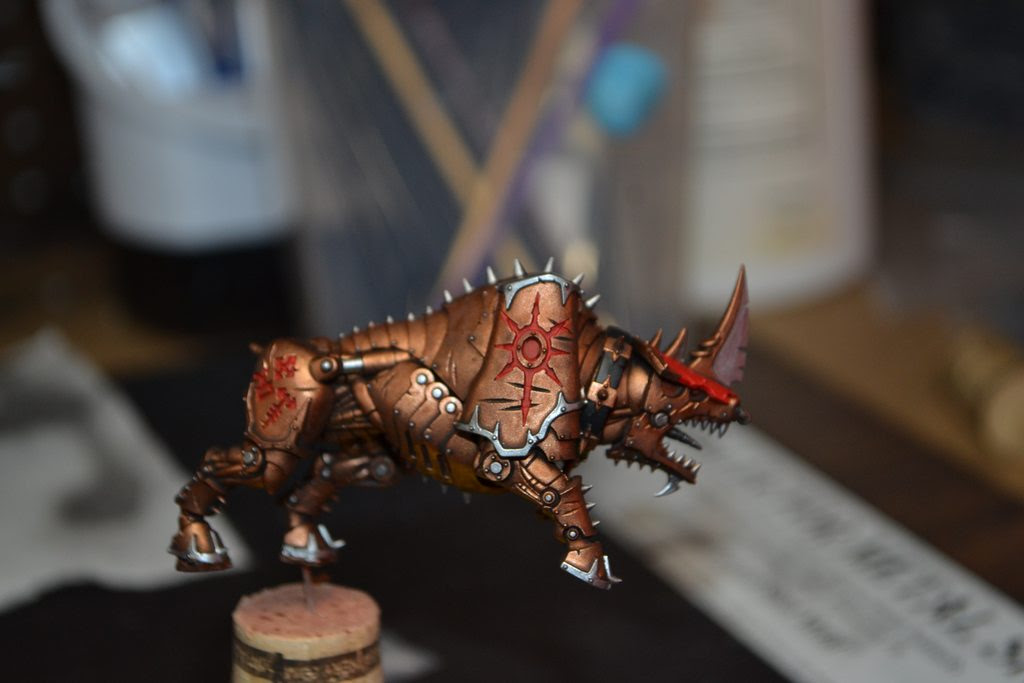 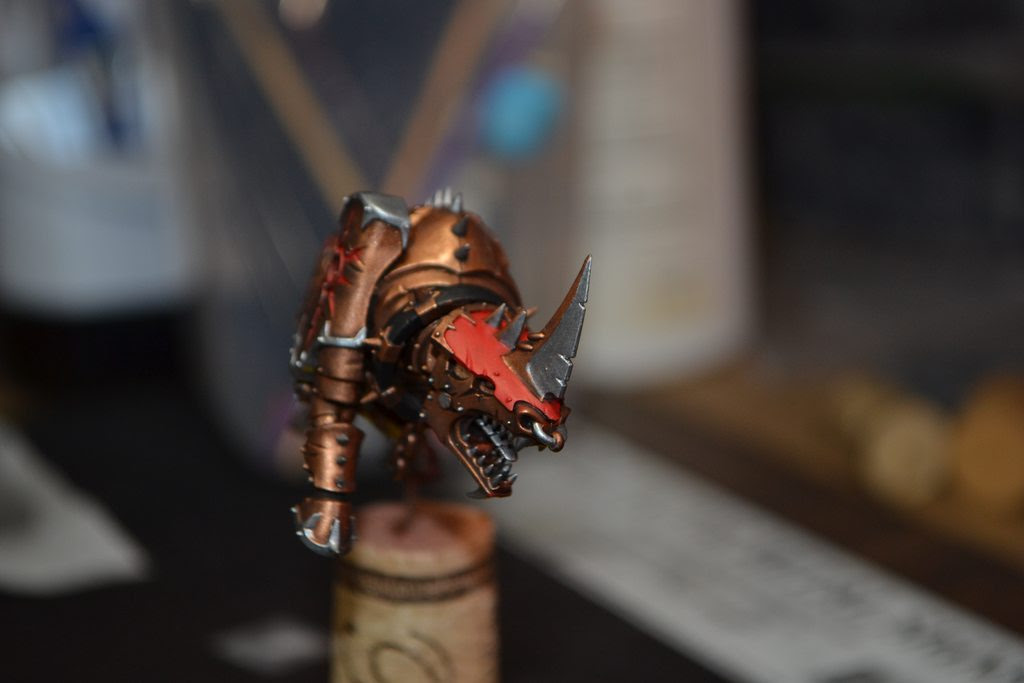 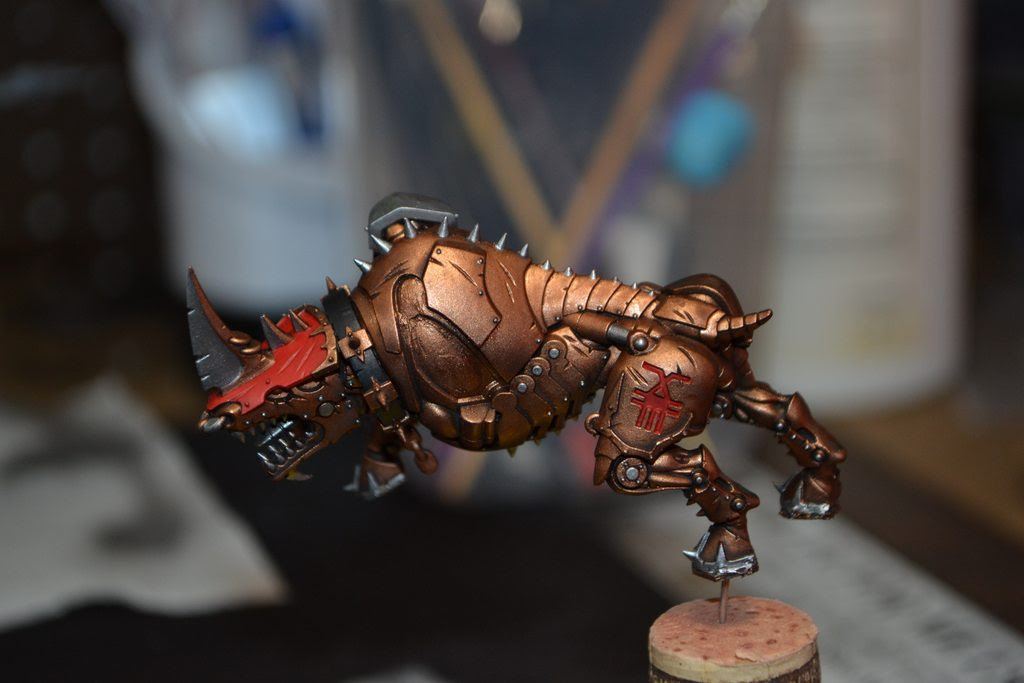 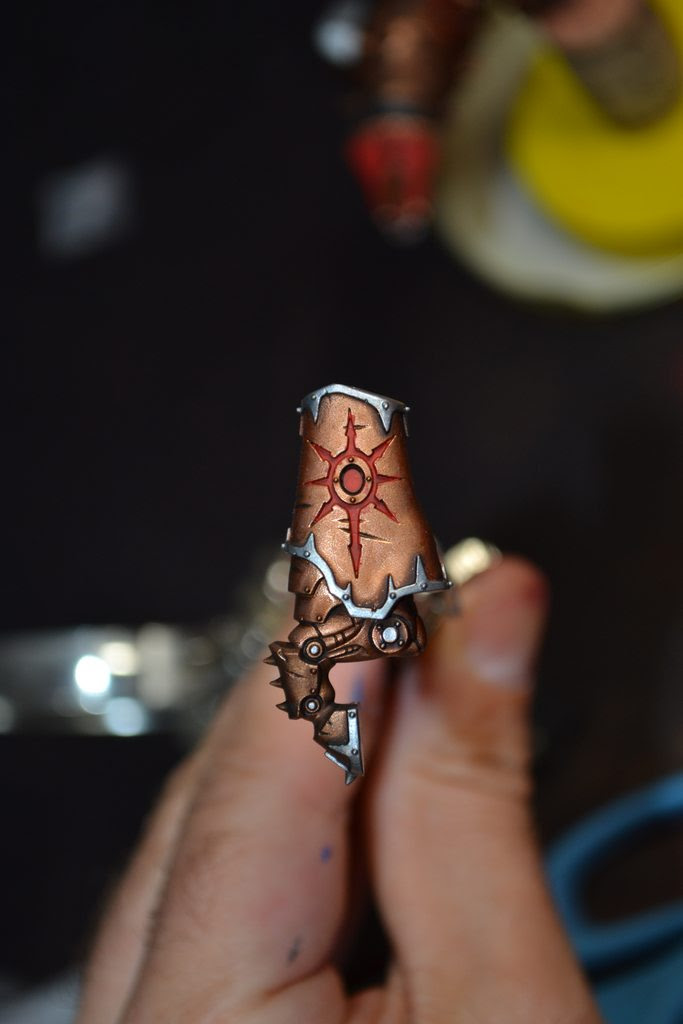 All done and told, I think I have about 50 juggernauts in various stages of assembly in my collection. 15 juggerspawn, 18 skullcrusher/bikers, 1 lord on juggernaut, and the rest undecided as to their fate. I think 15 spawn is enough (maaaybe), so who knows?

I want to have various breeds (paint schemes) im my daemonic herd to differentiate units and provide some flavor. If I can muster some creativity I'll come up with names for them.

If you can think of any cool sounding breed names for juggernauts, please leave a comment!

WOOHOO! WE FINALLY HAVE OUR KNIGHTS! 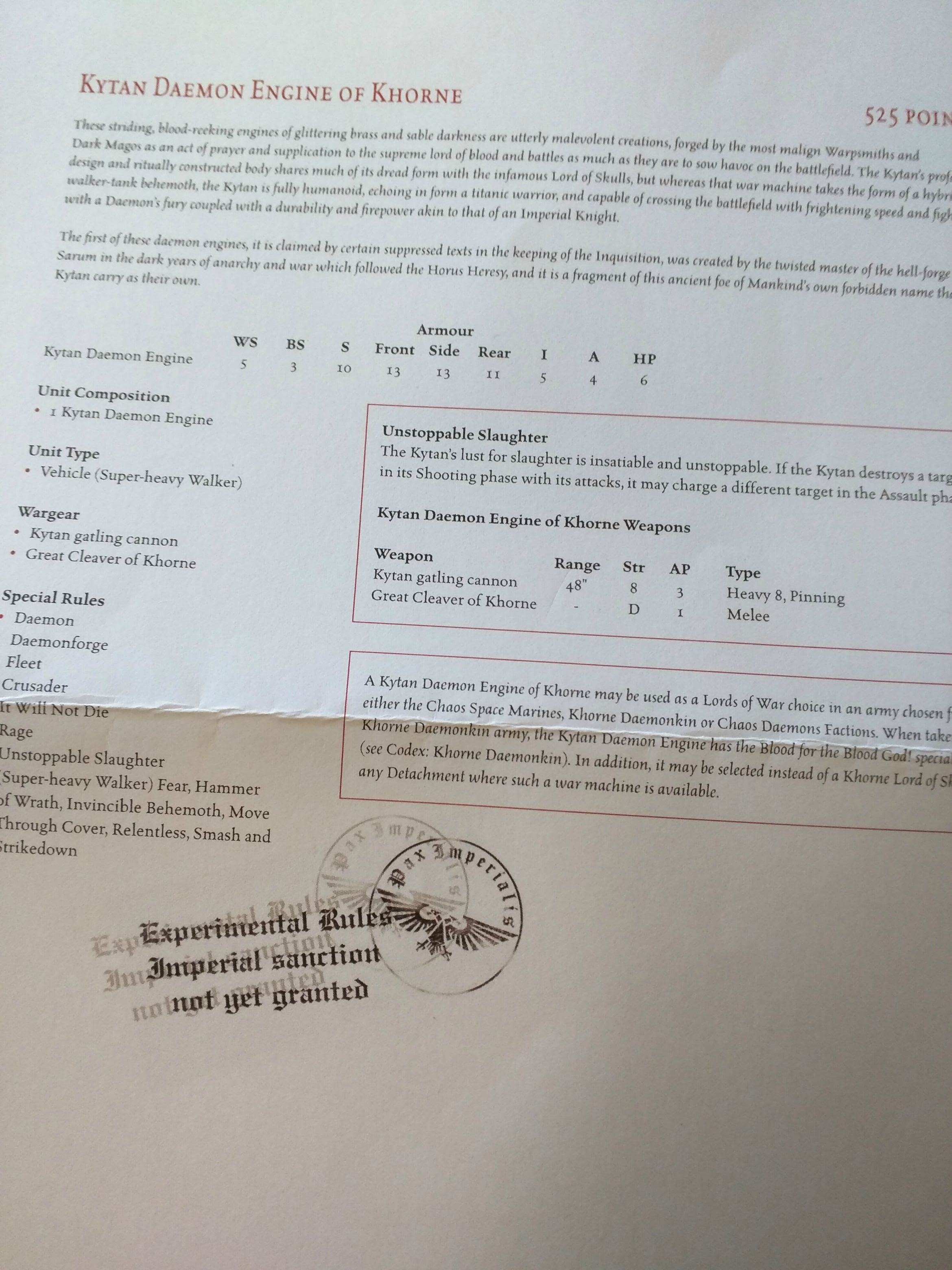 And they are awesome! No ridiculous WS/BS/I 3 because of Daemonic Possession nonsense!

And here are prices:

I know there are a lot of WFB players out there who aren't happy with what's happened to their treasured game. I don't blame them, but I'm actually excited about it!

I've always loved the models and armies, but don't really care much for the lore or game mechanics.

I liked a lot of the End Times releases (with the exception of Skaven, I think they're horrible), and the new Age of Sigmar stuff has the same design aesthetics, especially with the followers of Khorne.

In particular, I know I must have this guy (via Atia):

I've replaced the Rampagers torso with a Sanguinary Guard chest plate (sans nipples). I think it's a little more ornate and that's what I'm going for. I can still add spikes and Khornate details. I dunno, skulls come to mind? 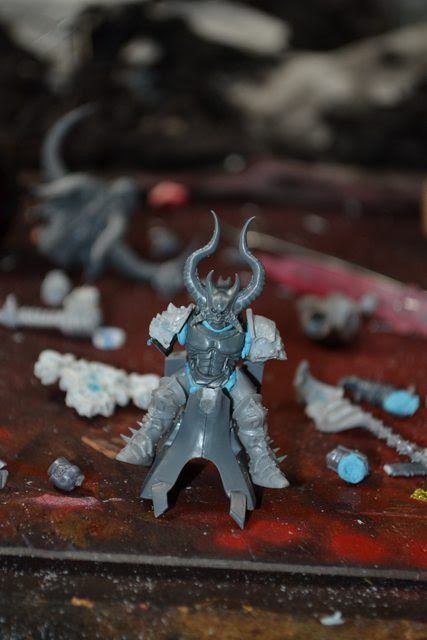 I lengthened the spear, which is made of two separate Skullcrushers of Khorne spear bits. The blade is from Be'lakor's sword:

It's long, but I think it needs to be. Arctos is riding around on a dragon and his weapon is definitely not just for show. It's gotta be long enough to stab infantry, so there we are. 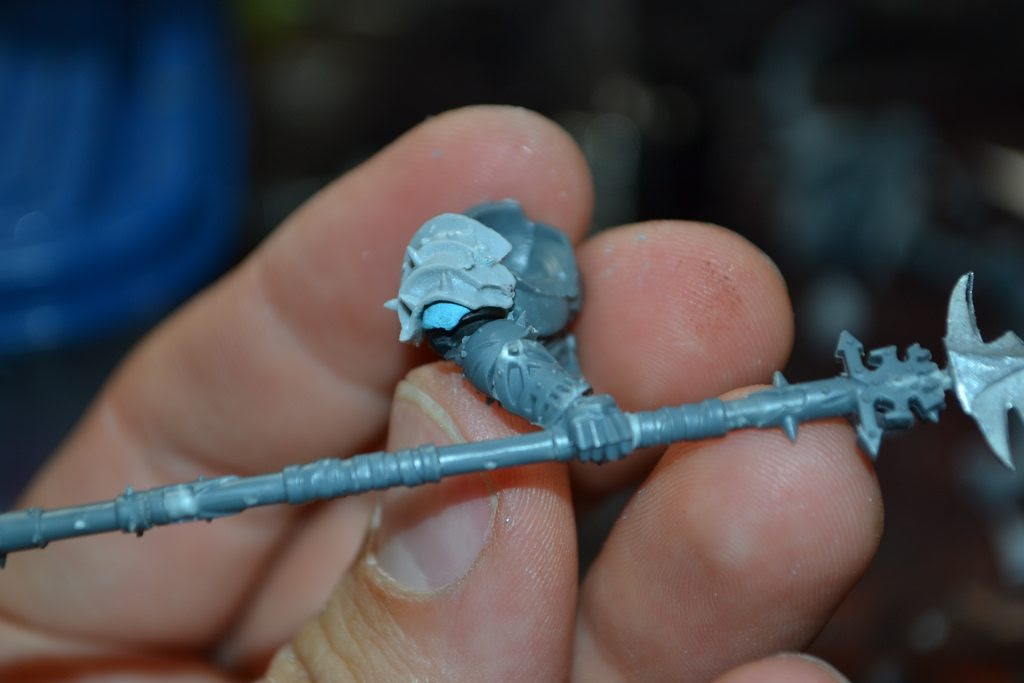 Early work on his right shoulder pad, a "gladiator" looking spaulder from the Red Butchers kit from FW. I've used a Dremel tool to grind away the terminator's arm. It's still a little lacking at this point. 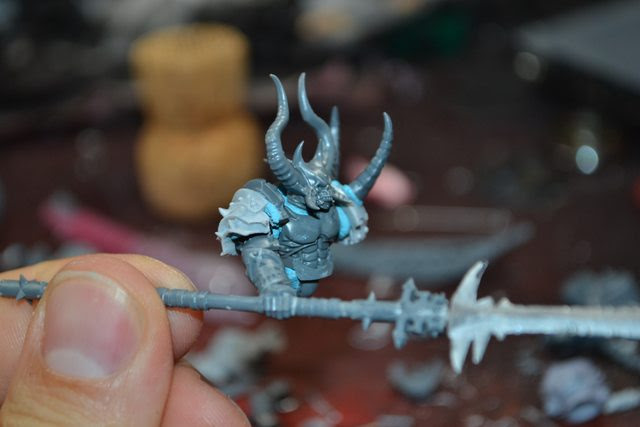 Here I've glued the gladiator spauler to a cut-away portion from a large one from the CSM kit. It bulks it up a bit and I think almost completes the look. 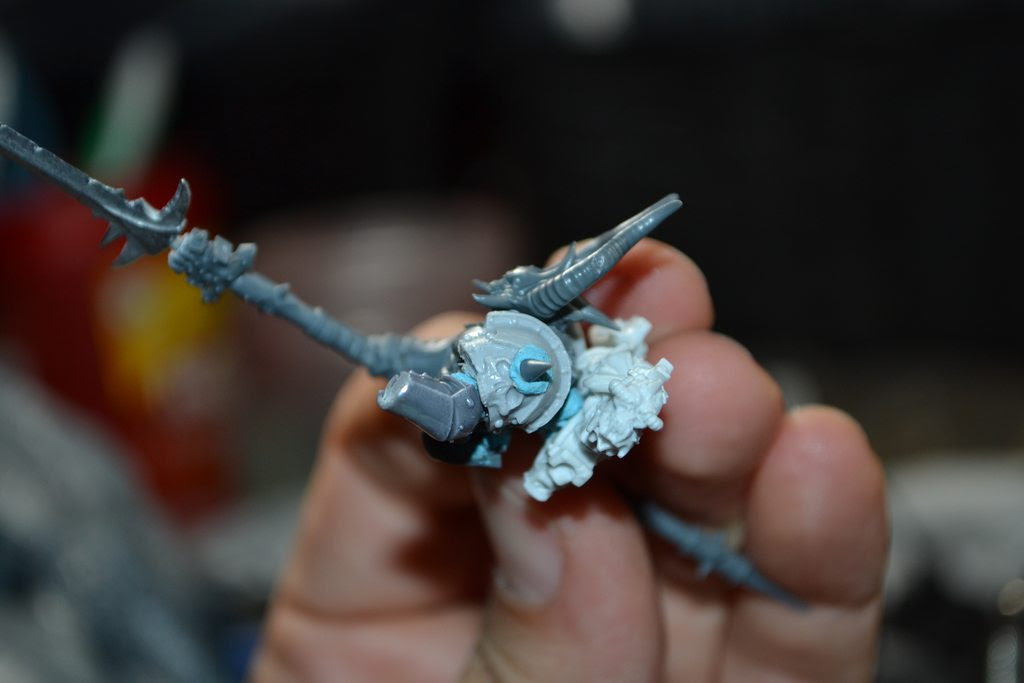 His left spaulder is from the Minotaurs chaplain from FW. Such an awesome sculpt, but a little too clean for a lord of a daemonkin legion. 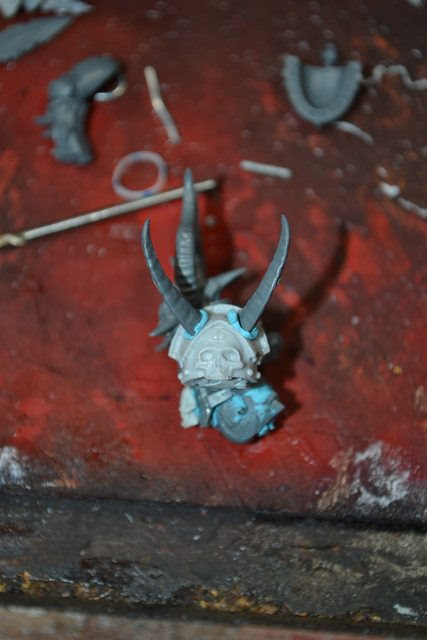 There we go. A good start to looking more daemonic. It's easy to get carried away with horns and such, but I love it. The challenge is going to be finding the right angle, as I don't want it to look like the horns would interfere with his mobility by knocking into his backpack.

I'm having a blast working on this guy. This is my most ambitious project to date, and I can't wait until he's finished!
Posted by Juggernut at 7:14 AM 2 comments: